Last winter my grandson came running into the house in a panic.  He was saying, “Bring cat food!  Bring cat food!”  I had to calm him down to figure out what was actually going on and finally discovered that a stray cat had appeared in our garage.

I grabbed my coat and the food and headed out to check the situation out.  When I got there my son met me.  He said a starving cat had just walked up to him out of nowhere.  I peered around my husband to get a look at the cat that had grabbed everyone’s attention.  What I saw was appalling.

The cat had long hair, which I guessed as being white.  It was tangled and matted.  I quickly placed the cat food on the cement floor and it ate it greedily.  It wasn’t scared of me at all.  This was not a feral cat; it had obviously belonged to someone.  Although the cat was full-grown, it weighted next to nothing and I could feel every bone in its body.  Its flat little face was dirty with tear staining like many Persian cats, but it had one remarkable trait, its eyes.

I picked-up the cat to examine it more closely and it (she) looked up at me with the most beautiful light blue eyes I have ever seen.  I fell in love instantly.

I knew immediately that I had to nurse this adorable creature back to health.  (Yes, as a child I brought home all the wounded animals and cared for them.)  My husband, already expecting me to help, decided to name her Mattie, because her hair was so matted.

As days went by, I soon discovered that Mattie had a severe case of ear mites, which resulted in an ear surgery for a hematoma.  She had one broken incisor and flea dermatitis.  I also discovered that her front feet had been declawed and she had been spayed. 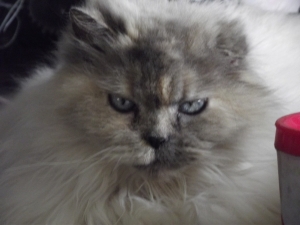 Nearly a year later, Mattie is the most loving little girl.  It is obvious that someone loved this cat at some time, she was a well cared for house cat that was declawed.  She loves nothing more than to lie in your lap and sleep contently.  How can a person be so heartless as to put this animal out to fend for herself without claws to defend her?

But Mattie is just one lost animal.  According to the ASPCA web site there are 5 to 7 million companion animals entering animal shelters nationwide annually.   At least 20 percent of cats are acquired as strays. (Source: NCPPSP) Many strays are lost pets that were not kept properly indoors or provided with identification.

In Mattie’s case I couldn’t find her owner and adopted her myself.  My plea to anyone with an animal they can no longer care for or their home can’t accommodate; take them to a shelter that can find them a new loving home.  A no-kill shelter is the best choice.  Do not put them out on the street to be injured, abused, or starve.

Chances are your local community has an animal shelter or some type of pet rescue.  These organizations can always use donations and most are non-profit organization that survive solely on donations, whether it is money, time, or supplies.  If you are looking for a way to serve your community, try volunteering at a local animal shelter.

If you are looking for a new pet try your local animal shelter first.  You may be surprised that many rescued animals are pure bred and many shelters have low adoption fees for sponsored animals.  Many times those fees include the basic shots and spay/neutering.  To find a new forever friend check out Pet Finders.