Several years ago, after being hired for a position with a global company, I was given the opportunity for a learning experience of a lifetime.  Being from a small town in Metcalfe County, Kentucky (pop. 10,069 ), I had never had a chance to traveled much, so when my new employer asked if I would be interested in traveling to Japan for training, I said yes immediately.

I traveled with 39 other coworkers, the majority of which had never flown on a plane prior to that time.  That alone would make a great blog story.  Our nervousness helped us all become good friends during the journey.  We flew from Nashville, TN to Dallas, TX and then boarded a flight to Tokyo, Japan, which lasted 13 hours.  We survived a four-hour layover in the Tokyo airport before flying on to Osaka and then experienced a one hour bus trip to Yokkaichi City. 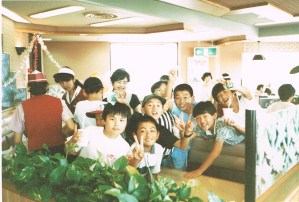 We spent the next seven weeks in Japan training for our new jobs.  Everything was an eye-opening experience to us.  None of us could speak Japanese, but many of the younger Japanese citizens were eager to practice their English.  School children are taught English as a second language and loved to talk to us “Americans” everywhere we went.  On a trip to McDonald’s, a group of children were having a birthday party.  As you can see in the picture they were eager to interact with our group.  The children in Japan are wonderful. 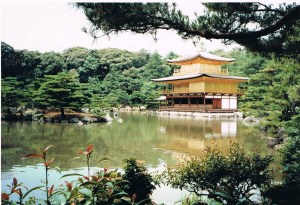 During our stay, our employer was very kind to us.  We were taken to see the ocean and to visit a Pearl Farm.  During that trip we also stopped to tour Kyoto, Japan.  This is a very ancient city with magnificent historical architecture.  We toured the historic temples of Kinkaku-ji (The Golden Temple), Heian Shrine, and Kiyomizu, plus many traditional shops.

A group of us went on a day trip to see Nagoya Castle, which dates back to 1612.  The castle is surrounded by walls with large gates, which are accessed by a bridge spanning the moat.  The castle’s moat is no longer filled with water. The castle is a popular historic site for Japanese as well as foreign tourist. 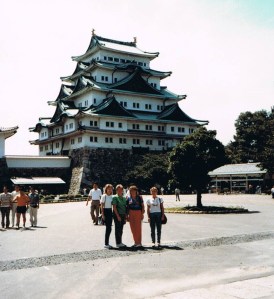 We also went shopping.   The popular department store is named Kintesu.  I would compare it to a Wal-Mart in the U.S.   The ability to travel anywhere I wanted on the train system was probably the most amazing thing to me.  Even though we couldn’t read anything written in Japanese we found that most city names were written in English on the train station maps.  We also soon became very good at using the country’s currency— Yen (¥).

We often gathered and watched TV.  We couldn’t understand the language so we entertained ourselves by guessing the plot of the movies and TV shows.  Our Japanese friends got a good laugh when we did this and were surprised that we could figure them out as well as we did.

In the U.S. taking a trip to the grocery is done without much thought, but in Japan it was a unique experience.  It is hard to shop when you can’t read the labels so the pictures on the packages become very useful.  They sell packages of dried fish snacks the way we sell packages of potato chips.  Taking a walk through the seafood section is amazing too.  There are tubs containing live eel, crab, and assorted fish.  There are booths with squid, shrimp, and tuna on ice and there were even a few creatures I couldn’t identify.

Eating in a restaurant is also a bit baffling.  Many of the owners are kind and helpful to visitors so it isn’t hard to get help ordering.  However, we all became great at using a sort of charades to communicate.  (Anyone from Kentucky knows that a lot of us use our hands when we talk anyway.)  One food was common at each meal.  There was always a bright pink or yellow item that was referred to as a pickle.  I soon discovered it was usually a type of vegetable or ginger, which had been pickled in salt brine.  I must admit I did make me miss home cooking.

I learned a great deal about Japan and its people and while there I began friendships that continue today.  The whole experience was great and I returned home with a new way of looking at the world.

5 thoughts on “EXPERIENCING A DIFFERENT CULTURE”